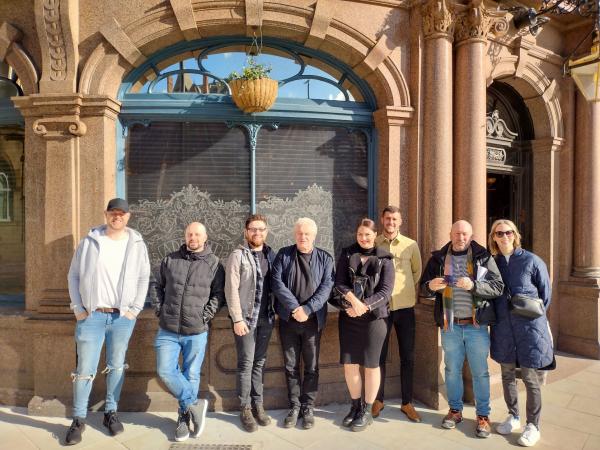 The tour begins at The Tetley, which was the headquarters for Leeds' most famous brewery, Joshua Tetley and Son. Here, learn about the history of the brewery & look around the site.

The second stop is The Adelphi, Tetley Brewery's flagship pub built in the late Victorian period. Here, learn about the history of the pub and also about the brewing process, as told through the eyes of a Leeds-based brewery in the mid-1900s.

From the Adelphi, the tour walks to the Duck & Drake via other sites of historical interest. These include the location where one of the world's first motion pictures was filmed & Leeds Minster church. Find out why the nearby railway embankment is covered in gravestones! The Duck & Drake is on Kirkgate, Leeds' oldest street with a dark past. Learn about the history of the Duck & Drake, plus more about Kirkgate's reputation.

Stop four is The White Swan on Briggate, one of the first venues to introduce music in a pub to Leeds, and the birthplace of Leeds City Varieties. Here, with the aid of maps and photos, explore other old breweries in the city & how it compares to the modern brewing scene.

Finally, the tour ends at Whitelocks Ale House, also on Briggate. At over 300 years old, this is arguably Leeds' most iconic pub, with its internal decor dating to the 1890s. Here, guests will hear stories about the rich history of Whitelocks. From its time as a pub plagued with crime, to the transformation after the Whitelock's family took over the pub in the 1860s.

A half of traditionally brewed beer (or equivalent drink for non-beer drinkers) is provided at each pub stop (five in total) & is included in the price of the tour.

To enquire about a date and time not listed, a private group booking, a customised tour or a general enquiry please email hello@leedsbeertours.co.uk.