A Tale of Maddening Ambition

From September 4th Slung Low’s adaptation of Herman Melville’s epic novel Moby Dick – renamed The White Whale - will be performed at Leeds Dock for nine nights. In typical Slung Low style, the play is an immersive event that encompasses a stage set built into the water of the Leeds and Liverpool canal. As the sun sets the boat’s deck arises from the water as the audience watch and listen in on headphones.

Situated just off Water Lane, behind Temple Works and Marshalls Mill, Slung Low nestles in the hinterland between the city and railway tracks. Outside is an allotment growing tomatoes and potatoes in old bath tubs. A chrome caravan twinkles in the afternoon light, reflecting the rust-coloured dragonflies that fly through the warm summer air. Bees, ragwort, dog daises and foxgloves line the scrublands of Holbeck around Slung Low’s metal gates. This is a surprising place, a hive of ideas, energy and radical theatre.

According to its founder, Alan Lane, Holbeck Urban Ballroom is a place of great opportunity. “We’re under no pressure here,” he explains. “We are outside the edge of being made nice. We did one show which went very well and someone said ‘If you’d have done this in the centre of London you’d be famous by now’. I said ‘We wouldn’t be allowed to do this in the centre of London’…”

Lane recalls how at last year’s Blood+Chocolate in York (based on experiences of chocolate factory workers and their families in 1914) the production manager was given a button that he could hit to stop any traffic light within 300 yards. “Then we marched 500 people across the street. You couldn’t do that in Oxford Circus. But you can do it in the city centre of York every night for three weeks.”

Having originally set up Slung Low at Sheffield University with the writer Matthew David Scott, Alan moved to Leeds after taking a position as an Assistant Director at West Yorkshire Playhouse. It was after watching a performance of Robert Lapage’s nine-hour play Lipsynch in 2008 at The Barbican, which began with an opera singer carrying a child through a full-sized plane on the stage, that he was encouraged to think about theatre in a different way. “I remember thinking ‘Ah…you don’t have to do the other thing – your imagination can be as big as you want it to be.’ As opposed to ‘How can I make the next version of The Seagull?’”.

Alan has a certain way about him, a confidence, ebullience and self-belief. This could partly be accredited with being the leader of a theatre company, but may also stem from his passion for telling stories. His personal determination and resilience that has contributed to Slung Low’s position as one of the most cutting edge theatre companies in the North, taking risks in non-theatre / alternative spaces and creating new experiences for audiences in unconventional settings.

Their latest production, The White Whale, certainly appears to be a natural progression from their recent performances in York, London, Hull and Liverpool. But it’s also the first time Slung Low have put on an event of this scale in Leeds. Running from September 4th-14th, The White Whale has already sold out, and although tickets are free there has been a huge demand to experience this performance from people in Leeds.

Its inspiration came from Matthew David Scott who said Slung Low should do Moby Dick because “It’s a tale of maddening ambition”. Alan admits that they are a very literal theatre company. “The Guardian said that we’re the opposite of theatrical hucksters,” he laughs. “We promise the impossible then deliver it. I love that’. 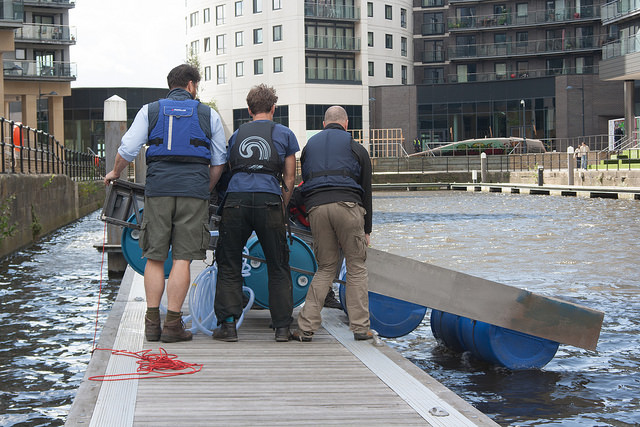 He recalls how Mapping the City in Hull lasted three hours, in different locations, and the show opened with a woman falling off the top of a building to the ground. “Everyone at the council was like ‘You won’t really do that’,” he explains. “I said ‘No, that’s literally what happens!’ It’s very similar with The White Whale. Moby Dick set on water. On a platform. In the middle of the canal. People stand around the side listening on headphones. How will that happen?”

As part of the promotion for The White Whale Alan and the Slung Low team travelled around sites in Leeds in their vintage Airstream caravan, talking to people about the play in different parts of the city including supermarkets, high streets and community festivals. Alan describes The White Whale to potential audiences as “A bit like watching an action movie or listening to a radio play, but it’s also piece of theatre. Nobody ever said to me ‘That doesn’t make sense!’ And people have said ‘Yeah, I get that’. We have to be clear with them what they are going to experience.

The exciting thing is that (the writer) James Phillips said he was going to set it in the future,” continues Alan. “So it would be an allegory for where we are in the world now, rather than where we were. We could cut out all of the pirate boots. Which is why we changed the title, so that people could understand it was something different.’

Slung Low moved to Holbeck Urban Ballroom in Bath Street in 2010 with ambitions to double the resource up, although the first winter they experienced at the site was a particularly brutal northern winter. ‘It was covered in mould,” says Alan. “We had this dream that all of these arches could be offices for other young theatre companies. And the dream lasted until November, when it got to minus four degrees inside and froze all of our computers.”

What began as a space for rehearsals located under five railway arches quickly developed into a place for audiences. Theatre sets and props sit alongside antique wood burning stoves which heat the building during the colder months, with fuel chopped by volunteers. Old sets become firewood; nothing is wasted at Slung Low. The impressive allotment provides fruit and vegetables for audiences to eat during performances and was partly created with donated bags of fertiliser and other gardening tools after police raided a local cannabis farm that was being run from a nearby industrial unit.

A unique aspect to the venue is that anyone can come to a Slung Low show at the Holbeck Urban Ballroom but the door fee is ‘pay-what-you-decide’, even cups of tea are free. Sunday nights see progressive and experimental theatre taking place, programmed by Porl Cooper, which can be of a radical or political nature, and provide an opportunity for anyone interested in theatre to experience it without a price tag. “You can have a perfectly reasonable night-out where you can be suitably entertained and leave without having put any money in anything. And some people do, and I have no idea who they are. Nobody watches over you if you put money in. But there are also people who come here and dump £50 in the jar on their way out.”

Wandering through the stalls and front-of-house, we walk through blackout curtains and into the performance area – where the night before How To Festival hosted a cooking display from Manjit’s Kitchen. Every two weeks there is a new show. With a capacity of 75 the Ballroom also hosts ceilidhs and very occasionally bands and music. There are, however, certain egalitarian principles that underpin the space. “Anybody who has need of it can have use of it,” says Alan. “If they have money we’ll take it off them, if they don’t then we won’t. We encourage them to trade something else. They might help us out in the garden, with the allotment. Or paint the walls.”

Alan believes that Slung Low are, essentially, a Holbeck company first and foremost, “We invest an awful lot of energy to be in this community. When the community has its successes we feel real pride in that, even though they aren’t our successes.” His enthusiasm for the area has even resulted in weekly culinary pilgrimages to Venus Supermarket, who according to Lane “Sell the best kebab in Leeds. And that’s another thing about Holbeck that makes us infinitely proud. It’s outstanding!” 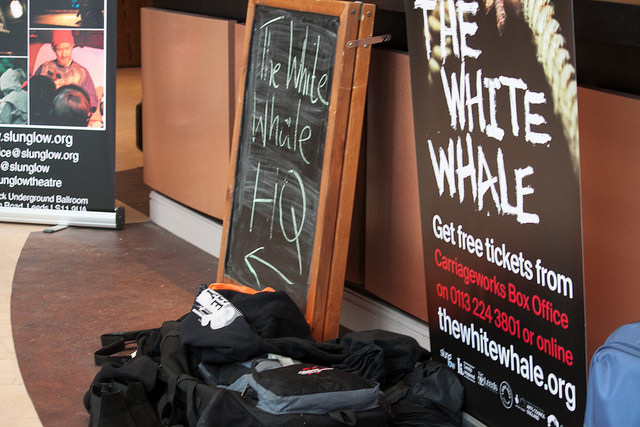 The White Whale runs from 4th -14th September at Leeds Dock. Tickets are sold out for all nine nights, to join the returns list email jane@leedsinspired.co.uk. For further information visit: http://www.slunglow.org/moby-dick/