The Hub of Grand Playfulness - Playbods Reflections This Summer, Playbods received a Leeds Inspired grant to create The Hub of Grand Playfulness: A city centre pop-up play space offering interactive arts activities for grandparents and their grandchildren at Age UK Leeds. They worked with twenty families from Leeds over four workshops. Playbods artists Kim Glassby and Bryony Pritchard share how they went about creating a space for different generations and some of the things they noticed along the way.

"In our previous projects and events we had received lots of interest from grandparents who care for their grandchildren on a weekly basis. They expressed to us that they wished for more places where they could go to regularly to play with their grandchildren and gain ideas for fun and active things to do as a family. And so in The Hub of Grand Playfulness we wanted to offer time and space specifically for this group which would be as fun for the grandparents as for the grandchildren, and where big creative family time could take place. We contacted local community centres, children’s centres, The Neighbourhood Networks, The Grandparents Association, and Leeds Older People’s Forum who greatly supported us to engage local families. Alexandra Boyle, Events and Volunteers Co-ordinator at Age UK Leeds worked with us closely in co-ordinating and hosting us in the light and airy Harrison Room at Age UK. We started building-up the space in the Playbods way – removing furniture, adorning the edges with cosy cushions and draped fabrics, and creating areas for serious sensation and movement.

We found four themes which we felt would be open and rich enough to appeal to all ages: ‘Crazy Drawing’, ‘Imaginary Worlds’, ‘Light & Shadow Play’ and ‘Wind & Water Play’. Activities within the themes included: den and landscape building, painting with wheels along floors and walls, experimenting with materials on an OHP and group dancing – all with open-ended resources so that the families could find their own interests and creations. Although at first we had to encouragingly remind the grandparents: ‘this is for you too!’, they soon began to gradually follow the younger group members, we began to see the child/grown-up gap narrowing and the group became one playful bunch.   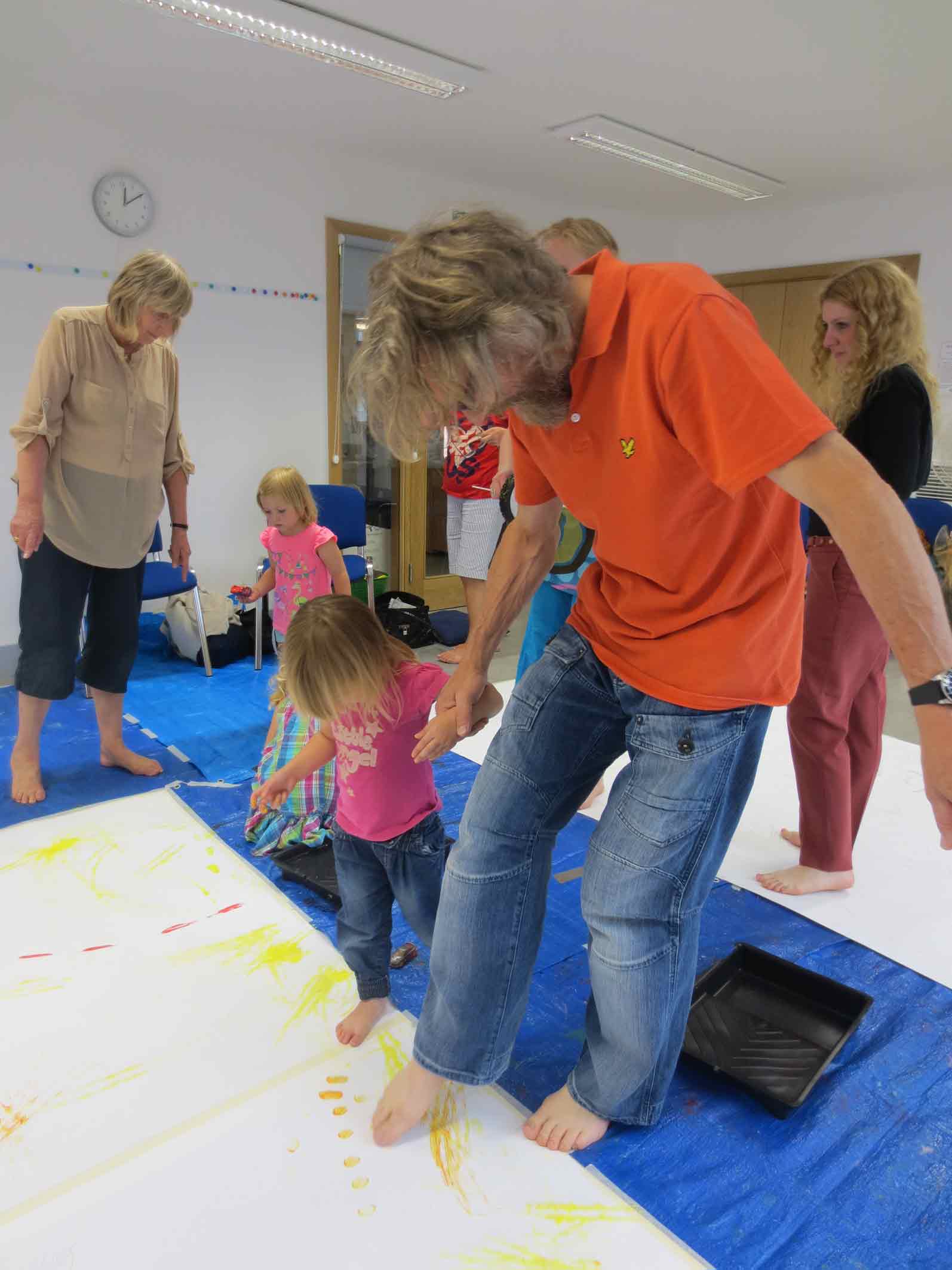 A granddad and granddaughter (aged three) dip their toes into trays of paint and with held hands begin to walk in different patterns across the paper – dabbing, swirling, shuffling... following their senses, each start to break-out into elaborate dances of their own before coming back together and joining-in one another’s painting again.  Between all generations of family members, there were tender moments of relaxation and closeness, boisterous bursts of laughter and discovered and re-discovered sensations. We were surprised to see that the older children and adults dropped deeply into the sensory activities as much as the younger group members. 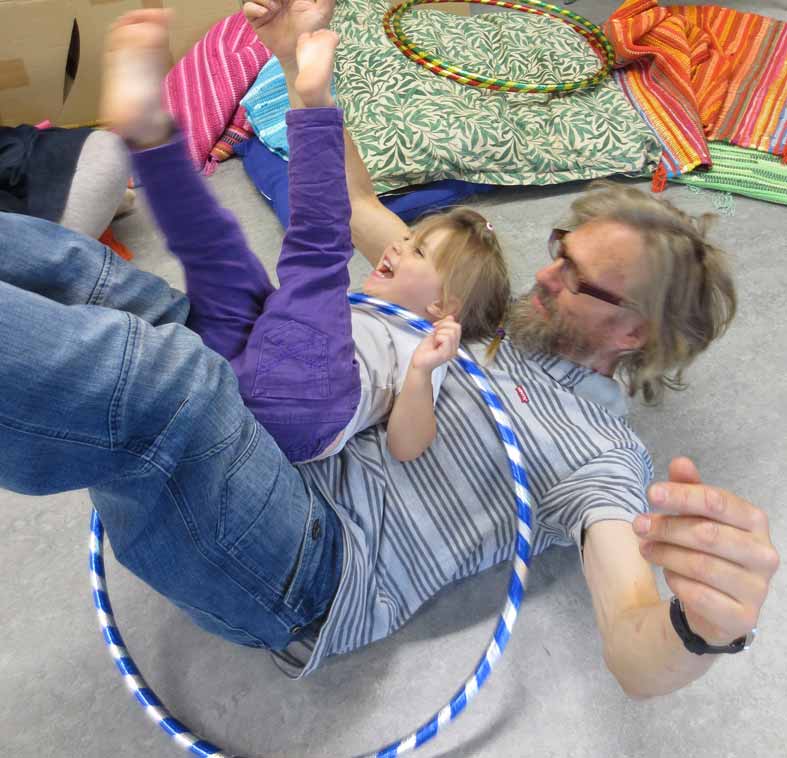 After the ‘Crazy Drawing’ session, a grandmother talks about new plans for her long strip of drive-way; to get hold of a large roll of paper and some old unused tyres and give her grandchildren more space and time to be spontaneous. Many grandparents reflected that they really appreciated the social time with other grandparents too. Simultaneously as they played, many began to naturally talk and share with one other about their family situations and also personal play memories. ‘It made me feel like a child again, yet I don’t have to pretend to be a child. It really takes me back.’

The project has reinforced to us and staff at Age UK the messages that there is a strong need of such opportunities for these families, as the grandparents felt that the creative play had made their sometimes challenging weekly childcare duties so much more stress-free, enjoyable and meaningful. And also they as grandparents desire to still be playful themselves as they wish to remain physically and creatively active with their whole families."