It's Not An Interview. It's A Chinwag.

A sneaky peak behind the scenes of Chinwag with Chris Madden.

Autumn 2012; I’m wandering down New York Street, LS2 when I’m collared by Craig Christon, who’s fitting out his new bar/art space Outlaws Yacht Club. He’s buzzin’ and tells me “it's good music, art, kids, just a cool place to hang out.” We swap a bit of chat and I tell him about the film I’ve just made- the brilliantly bonkers ‘Kubricks’ – the directorial debut of Dean Cavanagh and Creations Records Alan McGee’s first as producer. Dean’s one of my oldest mates but Craig’s more interested in Mcgee. “Do you think Alan would come up and do a talk about his career?” I’m not sure but I’ll ask.

The conversation…
Me “Alan, I’ve got these mates up in Leeds, they’re opening this really cool little bar/art space, trying to do something a bit different….would you come up and do a talk about your career?”
McGee “Nah, f*** that, not into it.”
Me “Oh…fair enough...I said I’d ask….”
McGee “But I tell you what Chris, you’re a therapist, let’s do a live therapy session. I’d do that.”
Me “Hmmm, I’m not into that but I tell you what, how about we just have a chat?”
McGee “Yeah Chris, nice one.”
It wasn’t meant to be like that; the thought of interviewing someone in front of an audience was definitely not on my bucket list, but anything to help out a mate and his vision. And that moniker – Chinwag – coined by Craig, really set the tone; “It’s a chat right, so it should be Chinwag. Having a chinwag. It’s a proper Leeds thing.” The name quite accurately sums up what it is. It’s a Chinwag.
I can’t quite believe we’re heading towards three years later but it’s evolved in a really lovely way. Chinwag has quite naturally developed as an event with a diverse and increasingly higher profile guests, but for me what has given it really special meaning is becoming involved with MAP, the Leeds based charity providing art/music programmes for young people at risk of exclusion from mainstream education. I can’t think of a better reason to do an event, creativity is the ultimate way to inspire young minds (and old ones for that matter!). Supporting a local charity that helps some of the most vulnerable in our community is the reason we keep Chinwag going. 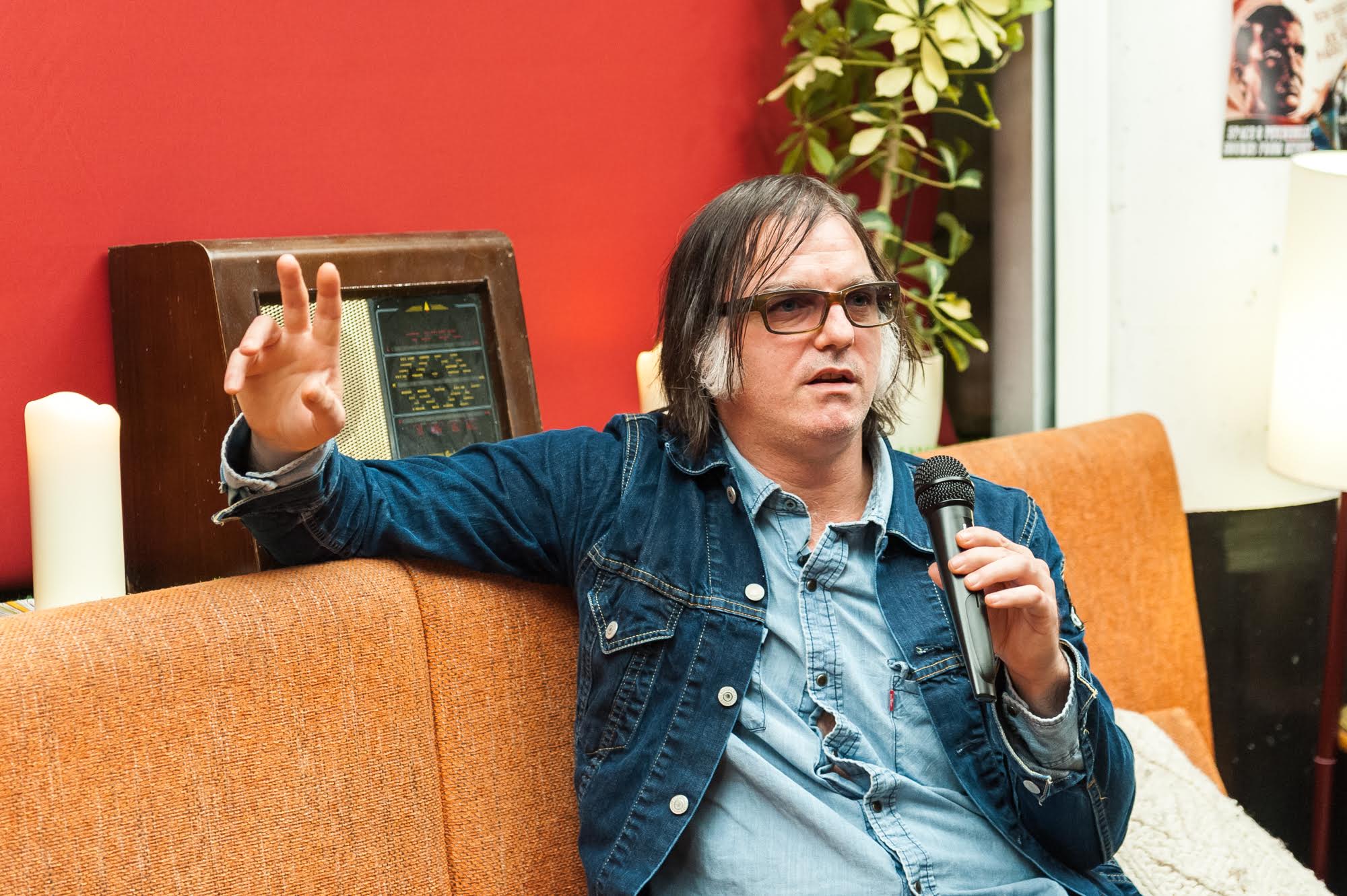 Chinwag with Anton Newcombe, 2015
So how do we choose guests? Truthfully, it’s as random as “hey, you know who’d be really good….” There’s never been a list. Someone will make a great suggestion and we’ll try to make contact. I don’t get hung up on any particular guest, a person is either going to say yes or no. If they say yes that’s brilliant, if they say no that’s fine. I don’t really want to force the issue and the last thing I want is someone coming along because they feel obliged. That’s the psychotherapist in me! I’m a person-centred, relational therapist so for me it’s important that a person really wants to come along and explore- tell a few stories, share a few ideas and, as often happens, reveal something of themselves. It’s a wonderful experience to share that with a person, and that openness comes, I think, out of the respectful and gentle way that I like to chat with each guest. It makes for some genuinely moving insights (and sometimes very personal revelations) which makes each guest utterly unique. There is no ‘most interesting’ guest, each brings their own dynamic individuality and I’m extremely grateful for that. 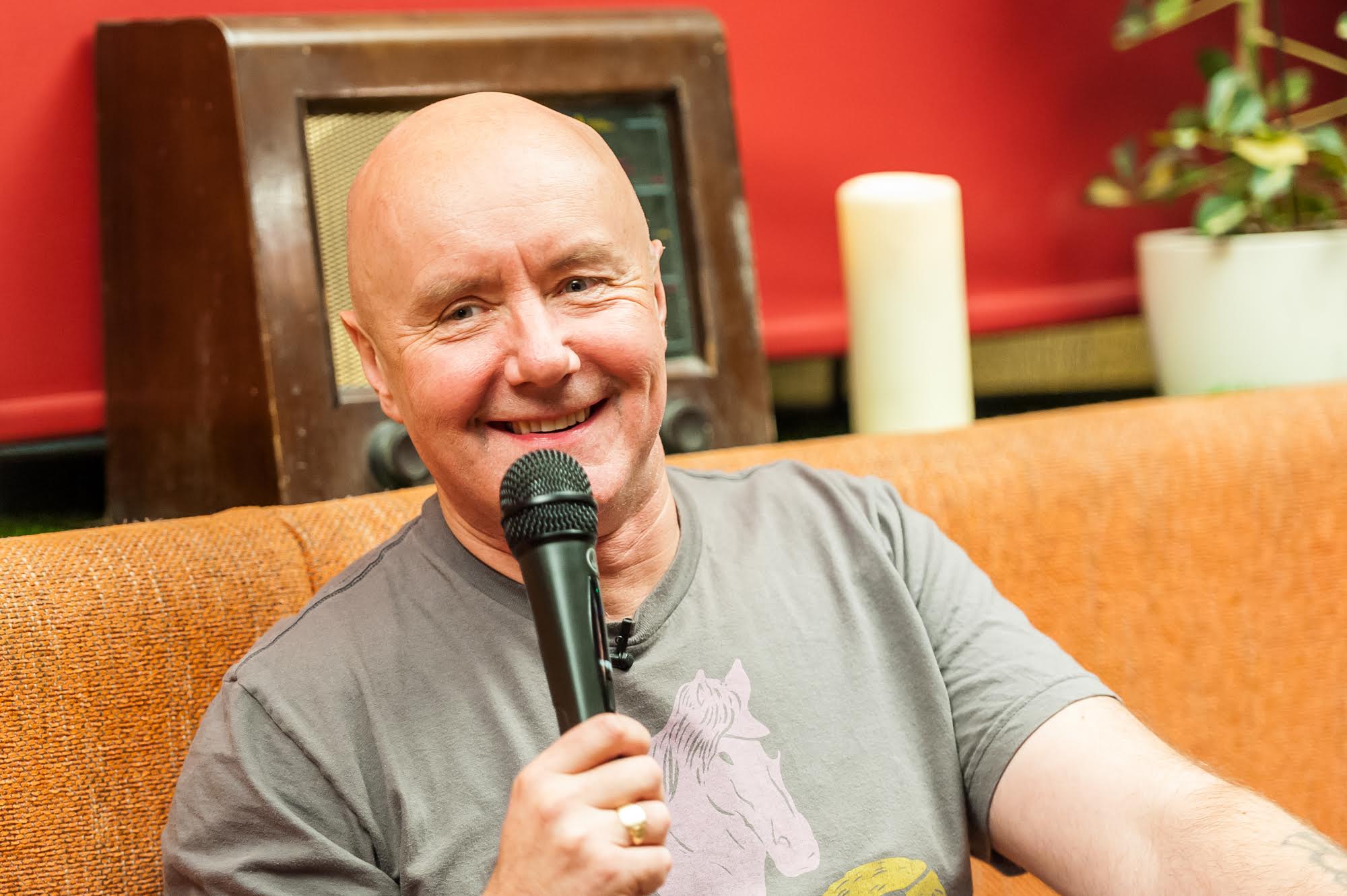 Chinwag with Irvine Welsh, 2014
I often get asked who would be my ultimate Chinwag? Truth is I don’t really have one. I’m interested in people and creativity which keeps it very open as to who ends up on the Chinwag settee. I wish I could say it was a more insightful and thought-out process but it’s mostly done on a whim ‘they’d be an ACE guest’. I think that’s what makes it fresh and without cynicism. Plus it isn’t about me- I see my role as facilitating and enabling each guest to give as much as they feel comfortable. And that’s my get out clause of ever having to be interviewee!
The next Chinwag is on Wednesday 16 September with writer and DJ Dave Haslam.
@chinwagtv
Lead image: Chris Madden (Mr Chinwag) and Viv Albertine, 2015